Today's post will feature the first of many writers to be highlighted here on BIBA - Countee Cullen (pronounced Count-tay). 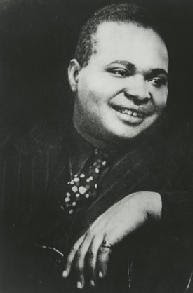 Mr. Cullen was involved in quite a number of activities throughout his life, mostly related to literature. There is not much concrete knowledge of his early childhood; details of his birthplace, date, and early caregivers are uncertified speculation at best. However, it is known that he attended DeWitt Clinton High School (The Bronx, New York City), and - while there - became editor of the weekly newspaper, was inducted into the honor society, served as vice president of his graduating class, and graduated with honors in Latin, Greek, French, and Math in 1922. His post-secondary education includes a Bachelors at New York University (where he graduated Phi Beta Kappa), and a Masters degree at Harvard University. At this juncture in time, he reached his greatest height of fame with his poetry collections Color (1925), Copper Sun (1927), and The Ballad of the Brown Girl (1927). His talent, education, and popularity all culminated in him receiving a Guggenheim Fellowship to study in France. However, upon returning in 1930, his works received less and less acclaim, and his renown was replaced by other literary giants, including Zora Neale Hurston and Langston Hughes. He turned down professorship offers to become a substitute teacher in the New York City public school system, and later a French and English teacher at Frederick Douglass Junior High School, where he remained until his death in 1946. During this time, he published more poetry, a novel, the first major translation of a Classical piece of literature by a Black writer, children's books, and works for theater, including a musical adaptation of a work by Arna Bontemps. He also was a teacher to James Baldwin.

Countee Cullen immediately succeeded Phillis Wheatley and Paul Laurence Dunbar as a "serious" and successfully published Black poet, despite the publication of Claude McKay's collection Harlem Shadows in 1922. Interestingly enough, all three of these poets mastered traditional forms, and contributed to them by including their unique cultural perspective and voice. Mr. Cullen, however, strongly considered himself to be a poet first, and not a "Negro poet." He explains:

"If I am going to be a poet at all, I am going to be POET and not NEGRO POET. This is what has hindered the development of artists among us. Their one note has been the concern with their race. That is all very well, none of us can get away from it. I cannot at times. You will see it in my verse. The consciousness of this is too poignant at times. I cannot escape it. But what I mean is this: I shall not write of Negro subjects for the purpose of propaganda. That is not what a poet is concerned with. Of course, when the emotion rising out of the fact that I am a Negro is strong, I express it. But that is another matter.

Many composers set his works to music; among them are Charles Marsh, Virgil Thomson, William Schuman, William Lawrence, Margaret Bonds, Clarence Cameron White, Emerson Whithorne, Noel DaCosta, and William Grant Still. Click HERE to listen to Still's setting of If You Should Go in his poignant song cycle Songs of Separation.
Posted by CastleSkins at 2:00 PM