Walking around my hometown of Providence, RI, I stumbled upon the sign below, erected by the Rhode Island Black Heritage Society. 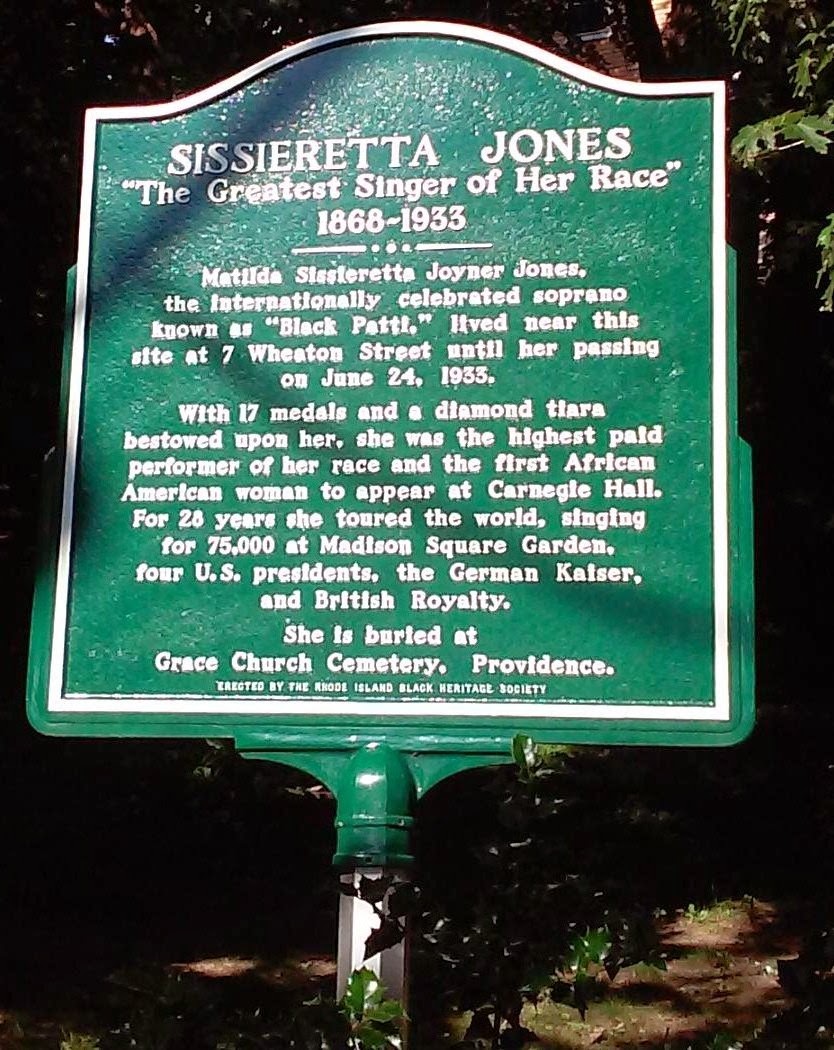 Matilda Sissieretta Joyner Jones, the Internationally celebrated soprano known as 'Black Patti', lived near this site at 7 Wheaton Street until her passing on June 24, 1933.

With 17 medals and a diamond tiara bestowed upon her, she was the highest paid performer of her race and the first African American woman to appear at Carnegie Hall. For 28 years she toured the world, singing for 75,000 at Madison Square Garden, four U. S. presidents, the German Kaiser, and the British Royalty.

She is buried at Grace Church Cemetery, Providence."

This sign is posted near where she lived, which was then called Wheaton Street. Today, this sign is on Pratt Street on the East Side of Providence, appropriately rather close to "The Music Mansion", on the corner of Meeting Street and Congdon Street. 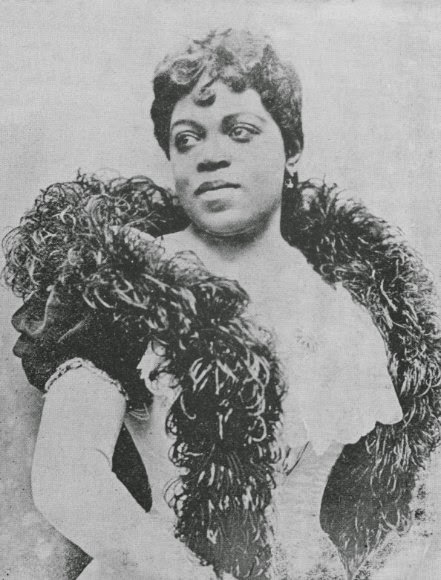 Upon further research, I discovered that as a child, she attended one RI's historic Black churches, Pond Street Baptist Church, where her father - Jeremiah Malachi Joyner - used to preach. She was born in Portsmouth, Virginia, but her family moved to Providence, Rhode Island at a young age. She would eventually get accepted to Boston's New England Conservatory, where she performed at Boston's Music Hall to critical acclaim for an audience of 5,000 in 1887.

The next year, Ms. Jones made her New York City debut at Steinway Hall, but it was not until another NYC performance where she caught the attention of the manager of another famous singer at the time, the Italian diva Adelina Patti. With this manager, "Black Patti" toured the west Indies with the Fisk Jubilee Singers, sang for President Benjamin Harrison (and eventually for Grover Cleveland, William McKinley, and Theodore Roosevelt), and performed at the Grand Negro Jubilee at Madison Square Garden for 75,000 people. These and other successes lead to her recital at Music Hall in New York, which was later renamed Carnegie Hall. The review from this concert sealed her notoriety.

Her career would end up including collaborations with the Czech composer Antonin Dvořák (teacher of H. T. Burleigh), tours across the world (including places in South America, southern Africa, Europe, and Australia), and the formation of a vaudeville troupe called The Black Patti Troubadours. Looking back on such a review from modern eyes may cause a bit of discomfort. However, the sad reality was that, despite Ms. Jones's obvious talent, the color of her skin prevented her from performing at many opera houses at the time. Despite her performance at a racially segregated (at the time) venue in Louisville, Kentucky, where Black Patti's performance was the first time a "colored performer received a bouquet" at that theater, Ms. Jones knew that she had to form this troupe to continue singing opera in the United States. The Black Patti Troubadours put on a show of incomparable grandeur, including 40 jugglers, comedians, dancers, and a chorus of 40 singers. The show would include Ms. Jones singing opera, to great acclaim.

Ms. Jones was inducted into the Rhode Island Music Hall of Fame in 2013.