Many cultures and traditions practice some ritual of transformation, ranging from traditional "talks" to elaborate ceremonies into adulthood. For the multimedia and design artist Daniel Callahan, transformation occurs through his practice of MassQing, which draws elements from various African rituals and ceremonies. In Daniel's words, MassQing is a ritual application of paint to the face in order to reveal one's inner state of being. The alternative spelling of MassQ is to differentiate it from the concept of a mask. A mask is an object used to disguise, distort, protect, and/or conceal one's true identity. The purpose of a MassQ, however, is to reveal something about ourselves." 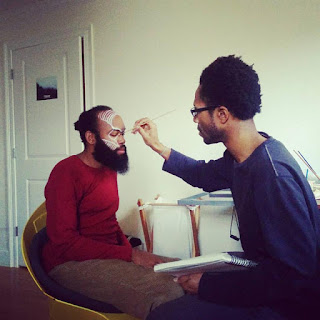 I recently had the honor of engaging in this process. To reveal my inner state of being, Daniel asked me a series of questions about my life, my art, my processes, my family, my relationships, my approaches to certain issues, and more. What is unique about Daniel's process, though, is that this does not in any way feel like an interview, but rather a talk with a close friend, partner, mentor, or family member. As we discussed various aspects of life, he sketched my face and plans for my MassQ. I only quickly glanced at his sketches, but what I saw showed a level of technical mastery that rivals the great artists of our time.

During the actual MassQing, the discussion continued. While I couldn't physically see my face being altered under Daniel's capable talents, I did notice myself thinking more about the topics we discussed, especially about political issues and the love I have for my complex and supportive family. Daniel made impromptu alterations to his design during the process, and paid meticulous attention to detail. His announcement of completion wasn't grandiose. Rather, it felt like an organic, subtle ending - a culmination of various factors simultaneously competing against each other and working with each other.

The time came to look at my transformed, MassQed face in the mirror. My immediate reaction was a sense of wonder at the talent of the artist. Then it occurred to me that the person in the mirror was me! 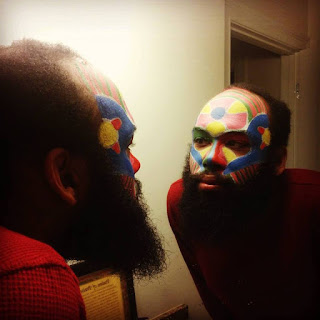 A sudden sense of pride came over me, as well as a unique type of strength that I knew existed, but perhaps never knew how to reveal. The MassQ that Daniel created has elements of multidirectionality     juxtaposed with a focal point, a multicolored palette that is focused and strategic, a design of lines and curves that bring out certain features of my face while creating an element of dance for the eyes, and a sense of partitioning that extends physical as well as personal/emotional features. Only a persona that is truly invested in his/her artistic practice can achieve such a combination of intuitive creation and flawless execution.

After the MassQing session, Daniel explained to me that the removal of the MassQ is also a part of the ritual. I spent the rest of my day with the MassQ, which included interactions with workers, a commute, walking and driving by hoards of teenagers in line for a concert, and doing karaoke. People were not shy to either ask me about the MassQ or give massive compliments. It did give me a sense of power and confidence, but a different type of a confidence. It is the type of confidence that comes from not being afraid to be who you are, in spite of how the world may look at you. While certain groups of people may experience being "viewed differently" for various reasons on a day-to-day basis, the MassQ forces the bearer to come to terms with this differentiation-through-transformation, and encourages to keep this feeling after the ritual has ended.

In March 2017, Castle of our Skins is planning on collaborating with Daniel Callahan on various events related to celebrating Black visual artists. Be on the lookout!!