The past couple years have been both brutal and enlightening regarding the race situation in the United States (and ultimately the world). Outside of the discussions of police brutality, Rachel Dolezal, Ta-Nehisi Coates’s theses statements, hidden racism against President Obama, and more, there have also been poignant discussions about Zwarte Piet in the Netherlands, France’s identity reversal problems in North Africa, even Lupita Nyong’o’s Mexican-Kenyan identity. One of the first BIBA Blog Posts looked at Nokuthula Ngwenyama’s African-Jewish heritage through her father’s lineage! This reminds me of the quote that my friend and colleague Ashe Gordon references often: "with 40 million African-Americans in this country, there are 40 million ways of being Black." (Henry Louis Gates Jr.). Now re-envision that number to apply to all Black people in the world. 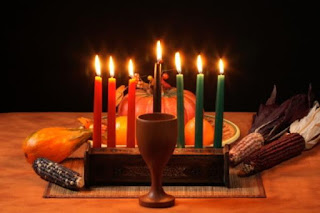 Growing up Black in the USA, I did not celebrate Kwanzaa. A woman at my church held a Kwanzaa celebration, but not every year. It petered out after a while, and I never questioned why because I never cared for Kwanzaa. Children in my schools would talk about Kwanzaa. “It’s ridiculous!” “It’s hilarious!” “It’s a made-up holiday.” (As if other holidays weren’t also made-up!) And in talking about Kwanzaa, there was also a tinge of talking about Africa and Africans. I witnessed a classmate with a very African name and two African parents also talk about Kwanzaa in this way, and I wouldn’t be surprised if I participated in the mocking of Kwanzaa just to fit in. How tragic a commentary that a holiday created to help Black people in the United States be a tighter community and remember their African heritage has become the subject of such ridicule, especially amongst Black people! 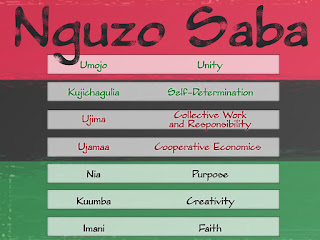 But this status of Kwanzaa is a result of systemic racism – a type of racism that is not overtly nefarious, but contributes to maintaining the “inferior” status of anything that is not “typical American”. A good example of a comment that embodies this systemic racism is “I want my country back”, which is usually uttered by an older Republican woman who wants to return to a time when gay people, immigrants, and Black people didn’t have that much of a voice or a presence in the American political fabric, and you could knock on your neighbor’s door to borrow sugar. It wasn’t until Castle of our Skins started that I began to intimate the true spirit of being Black, and the diverse ways to celebrate and own this identity. With that in mind, I am proud to include Kwanzaa in this celebration. I do not have a kinara (the candle holder). I do not know Kwanzaa songs. I have not memorized all of the Swahili terms. However, the 7 principals that come from African harvest traditions are available for me to reflect upon in the context of reflecting upon my Black identity. Setting aside the end of the year to do this every year is symbolic for me; a way for me to look back upon my identity that particular year, and to remind me to always celebrate my identity in the coming year.