As the week of research drew to a close, books piling, lists growing, inspiration expanding and filling our souls, we were introduced to yet another section of the archive that filled us with joy. The archives have a large filing cabinet where, alphabetically, people and organizations and ensembles and other events/items related to Black music research have folders that contain writings, press clippings, official documents, and other related material. Seeing this large cabinet full of documents of events we wanted to attend, people we want to know, music we want to hear - it was extremely moving for many different reasons. 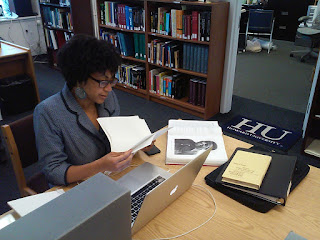 Firstly, I have often times - as a "classical musician" with brown skin - felt as though people like me are few and far between. I can never shake the feeling, even today - even after immersing myself and surrounding myself with other musicians, composers, and enthusiasts with brown skin - that I don't belong and that no one is paying attention. Now, whenever this feeling comes upon me, I can think of my time at CBMR. I can think of the hundreds of names I came across, knowing that this quantity of names does not represent everyone who has been involved in this work, and definitely does not represent those to come! I can think of the many events I read about in this file cabinet, spanning the gamut of renaissance and baroque music to contemporary and avant-garde expression. There are people documenting this community and its work, and those documenting it don't just exist at CBMR! It may be a simple feeling, but it is also an important feeling, and this message is one that Castle of our Skins wishes to extend to any other brown skinned "classical musician" who may also feel alone. 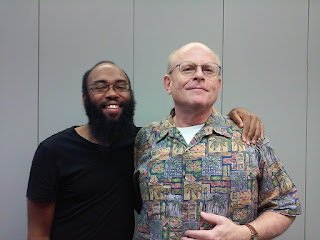 Secondly, while this cabinet was large and packed, I could not shake the feeling that this cabinet of events cannot represent even a 16th of the total events out there related to Black Music Research, with a focus on "classical music". What a thought! What have we missed? What other collections out there can help fill in our gaps? How can we extend the awareness of these collections to a broader public? I'm sure that this blog helps, social media helps, but can conservatory curriculum change to reflect a more complete picture of this world? I do remember discussing the lack of representation of composers like me within conservatory curricula with a former private composition teacher. This particular teacher was admittedly a bit naive, but well-meaning. The teacher told me simply "if the worth of the music is strong, its impact will be made." Perhaps he is right. This approach is similar to the quote about the arc of the moral universe bending towards justice. However, there must be actors working to bend this arc, and the week spent at CBMR made me feel like one. 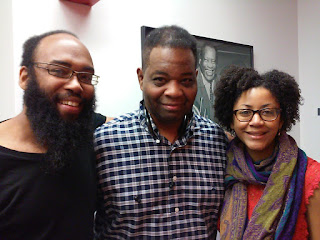 Lastly, Castle of our Skins has the goal of serving as a type of model for others interested in starting an organization similar to ours, whether it focus on celebrating Black artistry through music or celebrating the artistry of another culture through painting. Our mission, while focused, is inclusive. It is more of a critique rather than a filter. Today, despite the overwhelming number of orchestral works by composers such as Gary Nash, Kevin Scott, Jeffrey Mumford, Jonathan Bailey Holland, Ed Bland, Margaret Bonds, Evan Williams, George Walker, Olly Wilson, Florence Price, Renee Baker, Tania León, Mary Watkins, and others, it's typical today to go to an orchestral concert for an entire season and not see one work programmed by a composer with brown skin. And while chamber music concerts provide a bit more of a complete cultural picture with regards to "classical music", there are numerous ensembles that are proud of the "diversity" in their program, and this only extends to women and composers from less-represented European nations. The concept of diversity in "classical music" today does not usually include composers with brown skin. In my professeional travels, I try to make it a point to ask my colleagues their general knowledge of Black composers outside of me. The answers are rather dismal. Some might say, "this is okay because composers should be associated more with nationality rather than race/skin color." I would be okay with this, but the problem then lies with the fact that Black Americans are generally not included in the fabric of "classical music". In discussions of American Composers (which usually focus on composers from the United States rather than all of the Americas), how often do you come across Julius Eastman or Blind Tom? While they are definitely American composers, the label is usually Black composer. Perhaps collections of Black music further exacerbate this separation. But then I ask myself, would this documentation exist within the fabric of "American Music" if it weren't separated? The state of Blacks in "classical music" is definitely a complicated catch-22, in which the general system of "classical music" includes unspoken expectations that conceal segregation. Castle of our Skins attempts to change the system. Hopefully a box for us will be created in some Black Music collection in the future.

(This is the last part of the BIBA Blog's CBMR series! We'd Like to Hear From YOU!)

Posted by CastleSkins at 8:40 AM